Is it possible to set up an IT infrastructure for translational research for an entire country? The Dutch Translational Research IT (TraIT) project (http://www.ctmm-trait.nl/) believes it is. Admittedly, The Netherlands is not exactly the same size as China or the US, but nevertheless already 26 partners from industry and academia to collaborate in this consortium to organize, deploy, and manage a nationwide IT infrastructure for data and workflow management targeted specifically at the needs of translational research. It includes the Dutch university medical centers, notable companies like Philips, and charities such as Dutch heart and cancer foundations.

At its outset, TraIT worked closely with selected translational research projects and scientists, piloting potential solutions with real research data from these projects. This work resulted in the selection and implementation of central TraIT services for clinical data gathering (OpenClinica) and image archival and retrieval (NBIA). TraIT has now reached a very interesting phase where the first IT solutions put in place in each of the four major domains of translational research (clinical, imaging, biobanking and experimental (any-omics)) are starting to flourish.

Word is quickly spreading about the TraIT infrastructure available. In particular, OpenClinica is taking off very well with amazingly little advertisement: currently the TraIT installation (OpenClinica.nl) contains 47 studies with 256 users representing 77 institutions, and is still growing rapidly as can be seen in the following graph: 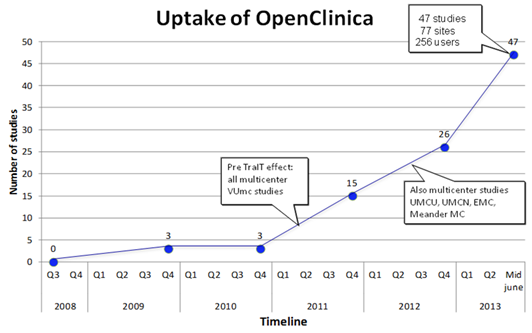 Based on the input obtained from users, we decided to augment some of OpenClinica’s capabilities, in particular for data loading. Obviously, the improvements are made available to the community whenever possible. For further enhancements, TraIT and OpenClinica, LLC entered into a partnership focusing (initially) on improvements in the areas of role-based security, linking to external (imaging) data archives, and data import/export. Hopefully, the fruits of this collaboration will soon be available to the entire OpenClinica community.

The next challenge faced by the TraIT project is integrating the clinical data from OpenClinica with molecular profiling data, which is needed to address the key question in translational research: how to correlate the variation in disease phenotype to variations in underlying biology. Another open source solution has been selected for this purpose: tranSMART, a translational workbench and data integration environment supported by several major Pharma and research consortia. The open source tools selected promise to be a powerful combination: data collected in OpenClinica can be further shared and analyzed in the tranSMART environment.

View slides from a presentation on TraIT delivered at the 2013 OpenClinica Global Conference.